Finding a calypso orchid on our walk Saturday was a surprise, because its expected habitat is undisturbed moist old-growth forest. The place where we were walking is anything but that: it’s right beside a paved forest road, and over the past 150 years or so there has been much disturbance by a succession of loggers, hydraulic miners, gold panners and dredgers, hikers, hunters, and brush clearing for fire suppression. We spotted the orchid as we returned to the road from looking at other flowers lower on the slope, and it was growing within 5 feet of the pavement. Our interest attracted Jack the mastiff who wanted to see what we were looking at, and then we had to protect the flower from his big feet.

The full name is Calypso bulbosa var.occidentalis, or the Pacific or Western Fairy Slipper; there’s a paler variety in the eastern US, Calypso bulbosa var. americana, or the Eastern Fairy Slipper. (The Washington Native Orchid Society has a good description of both with photos, here.) And its actual distribution is circumpolar, with two other varieties being found in Eurasia and Japan (map).

I enjoy identifying what we see, plant or animal, not so that I can check it off my life list (I don’t have one) but because then I find out more about it. Doing a bit of research for this post, I found that the Calypso orchid requires a mycorrhizal partner—a fungus that extracts extra nutrients from the soil which the plant, with its single leaf, is unable to generate. These partnerships between fungi and plants are, as we are coming to discover, common. Only painstaking investigation can detect them. The relationships are specific, a particular fungus with a particular plant species. It’s one reason why many wild plants have proven nearly impossible to transplant to gardens.

Regardless of your motives or expertise, please leave wildflowers where you find them; many are struggling enough with various human-caused disturbances. The flower you pick may be the only one the plant will produce for this year or several years, so picking it means no chance of producing seeds. And for the Calypso orchid and others, it’s even worse: picking or disturbance can mean the death of the plant

The Calypso orchid is being rapidly exterminated in populated areas due to trampling and picking. The corms are attached by means of delicate roots. These roots can be broken by even the lightest tug of the stem. Hence, when the flower is picked the plant usually dies. [WNOS page]

The Calypso orchid produces no nectar but fools bees into visiting with—depending on which expert is talking—its color, shape, fragrance, or the tiny hairs on the flower (visible below). 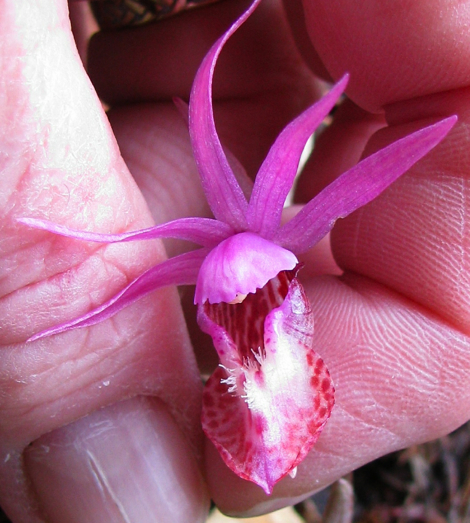 One who has studied this phenomenon in the eastern variety of Calypso orchids claims that the bees learn by experience not to bother with these unrewarding flowers, after visiting a few Calypsos and thereby cross-pollinating them. Only queen honeybees live very long, so each spring there’s a new population of worker bees to be fooled by Calypso, the orchid named after a sea nymph who loved Odysseus and kept him on her island for seven years, while he longed to be on his way back home. The name means “hidden” or “I will conceal” in Greek, and presumably refers to the orchid’s inconspicuous habit, close to the ground in shaded spots.