As President Obama made his tour of the Gulf region on Monday, White House Deputy Press Secretary Bill Burton told reporters aboard Air Force One that BP would move forward in creating an escrow account to ensure, “that all the people who are affected by BP’s oil spill are made whole.”
from politicsdaily.com, June 14, 2010.

What kind of a disconnected nitwit can use the phrase “made whole” about this? Believe it or not, there are some things money can’t change. All the money in the world cannot turn back the clock and make the ocean clean, bring back to life the millions of dead creatures—the tiny ones we never see also suffered, also died, and from our myopic human standpoint they are important because they’re part of the web of life that makes shrimp for us to catch and eat.

This isn’t “just words”, this is a perversion of thinking that is at the root of our modern lostness. Minds so separated from the real “buzzing blooming confusion” of life, that they are hardly here in the same world with the oiled pelicans and the devastated fishermen. Yet like aliens from some distant galaxy they walk among us and their power is immense, to act in our world, control what we know, run our government like a puppet theatre.

A dead jelly fish floats in oil in the Gulf of Mexico near Venice, LA. AP photo from Telegraph (UK). 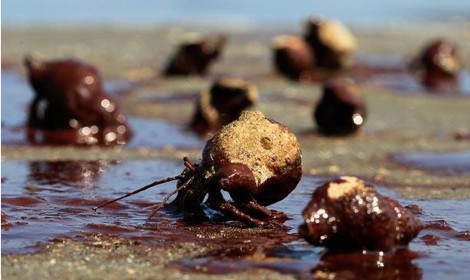