As for BP, it has taken steps to beef up its PR operation, in an attempt to limit the damage to its reputation. The company has recruited as head of the firm’s US media relations Anne Womack-Kolton, the former press secretary to Dick Cheney.

from this morning’s UK Guardian

True, the company’s public relations since the explosion have been terrible: suppressing and lying about things that will become known eventually anyway, and ridiculous efforts to play down the seriousness of the oil spill. Tony Hayward, BP CEO, “told Fox News sister network Sky News on Tuesday [May 18] that he is largely unconcerned:

After BP has squandered any potential public credibility, the most silver-tongued revolving-door lobbyist-cum-government appointee (such as Ms. Womack-Kolton) will be hard pressed to reverse the tide. We all know which tide they really truly care most about, when it comes to the tide of financial-world and public opinion, vs. the tide of oil. 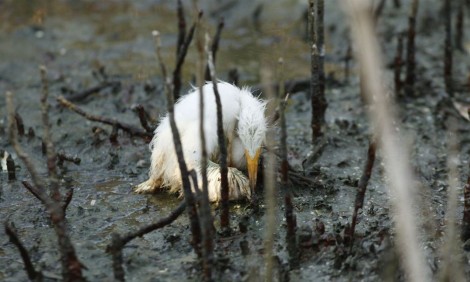 Young heron dying in oil-soaked marsh. Photo by GERALD HERBERT / AP. Copyright by photographer and AP, not used with permission.

3 thoughts on “What matters most to BP”