You may not like the results, but here’s a quick test of your eye-hand response speed. It’s a little game on the BBC’s site, part of their section on the human body. This part is about sleep, because being tired increases reaction time. Your job is to use a dart gun when sheep at one side of the screen 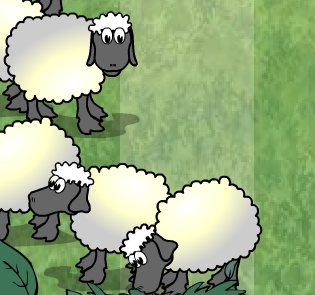 make a run for the other side. The dart gun will stop them in their tracks.

Don’t get an itchy trigger finger, though, because a false move costs you 3 seconds of time in which sheep can run across with impunity. At the end—5 sheep—you’ll get a rating, and a list of your exact times to the thousandth of a second.

These are the fastest sheep I ever saw, and my rating never rose above Ambling Armadillo. Use the link above rather than the one on the BBC’s main Sleep page, because that one goes to a small screen version which gives you even less time to nail those pesky sheep.

Too bad the BBC isn’t using this as an opportunity to collect data; if we all gave our age and sex, they’d have a big sample for correlating those factors with reaction time. How long the time is, depends on mental processing speed; it’s in your brain, not your muscles (although while darting sheep I found that my index finger clicked my laptop trackpad button faster than my thumb, which is usually what I click with in normal computing). Some of the brain-game sellers say their games improve reaction time, and that seems quite believable; athletes practice to increase their reaction speed, and pianists get faster with practice. I’d be interested in knowing how much of the improvement from computer brain games is transferable to non-game situations, though. And naturally the fastest reaction times occur when there is only one action to be chosen: you’re going to be faster using the dart gun against the sheep, than responding to a complex driving emergency where you must decide whether to swerve or brake, how much, and how fast.

Reaction times become longer with age (after the late 20’s, according to this literature review on reaction times), fatigue, distraction, and a variety of other factors. And, when times are measured in thousandths of a second, a single individual will exhibit quite a bit of variation even in a single testing session. The literature review cited was done in 2008 and seems to be a good summary of what’s known.

Looking for more about reaction times, I found another online test which doesn’t have any cute sheep but does track and display the data from all users. It’s not broken down by age or sex, though. The site’s owner says that, based on 2,656,058 clicks recorded thus far, the average (median) reaction time is 215 milliseconds. But some people can regularly post times of 130ms. This test not only rejects clicks that jump the gun (before the signal is given), it only counts data of 100ms and above, in order to avoid skewing the data with “lucky clicks”, when someone’s brain issues an order to click before seeing the signal but then the signal occurs just before their finger performs the movement.

Let us marvel for a moment at the process, which involves multiple neurons structured like this. 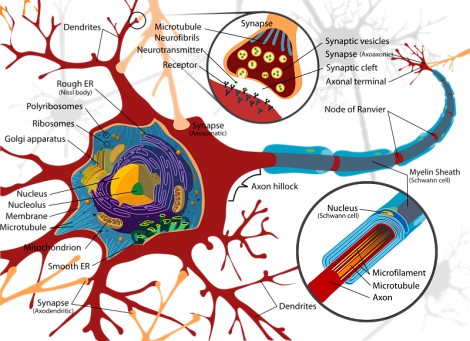 Diagram from Wikipedia, where a larger version can be seen.

Communication within a single neuron is electrical, but that between neurons is chemical, so neuron A has to make and release a chemical to pass a message on to other neurons. 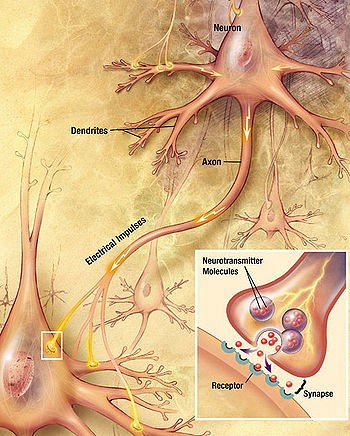 A signal propagating down an axon to the cell body and dendrites of the next cell. (Wikipedia)

And this is just the transmission part of reaction time. The processes involved in choosing an action…well, my neurons are boggled enough for one day.