Change happens fast in the spring. We walked Saturday along a road we’d been on a week ago, and most of the flowers we saw had not been in bloom seven days earlier. The most abundant flowers were Siskiyou iris, Iris bracteata.

They vary in color from white to light yellow, and sometimes the reddish-brown veins are so numerous that they seem to tint the petals.

Delphiniums were few and tattered, but some were much deeper in color than we’ve seen before. This is Menzies’ larkspur, Delphinium menziesii, we think.

A rare sighting was of this Striped coralroot, Corallorrhiza/Corallorhiza striata, in the orchid family. We looked hard for others but saw only the one. It is a plant, but it is incapable of photosynthesis, and has no chlorophyll.

When I was taking biology these sorts of plants were called saprophytes and it was believed that they got their grits by digesting organic material, as some fungi can do. This outdated theory is still found online. Now it is known (until further notice) that no plant can digest organic material through its roots (1), and the former saprophytes have been found to be parasitic either upon other plants, or upon fungi. Corallorrhiza striata dines upon nutrients produced by fungi, plugging into their mycelium, the underground structures of branching threadlike hyphae—the “body” of the fungus that produces the aboveground mushrooms we see.

(1) Wikipedia says “It is now known that no plant is physiologically capable of direct breakdown of organic matter”; I added “through its roots” above, because there are carnivorous plants that do digest insects they catch, either through secreting digestive enzymes or through some other means. How this fits in to current theory about plants digesting organic material, I don’t know.

Plants like the coralroot are called myco-heterotrophs (2); the fungi they parasitize are the hosts. As far as we know, this is a parasitic relationship, with no benefits to the fungi. Many orchids are such parasites, others are only partially dependent on parasitism (producing the rest of their nutrients by photosynthesis), and some are “ordinary” photosynthesizing plants. Some myco-heterotrophs parasitize only specific fungi; for instance, Corallorhiza maculata sips only from Russula mushrooms, or I should say from their mycelium. Quite likely many species of myco-heterotroph have specialized in this way, we just don’t know the associations yet. For those interested in growing such orchids the parasitism presents a huge difficulty, since the ordinary requirements of a green plant—sun, water, nutrients in soil—will not sustain life in these non-photosynthesizing plants. Yet another reason, if more were needed, to avoid digging up or buying such plants (unless you are absolutely certain they were not taken from the wild).

In the background of the coralroot (first photo) can be seen another flower that we saw dozens of today, with the engaging common name Elegant cat’s-ear (Calochortus elegans). 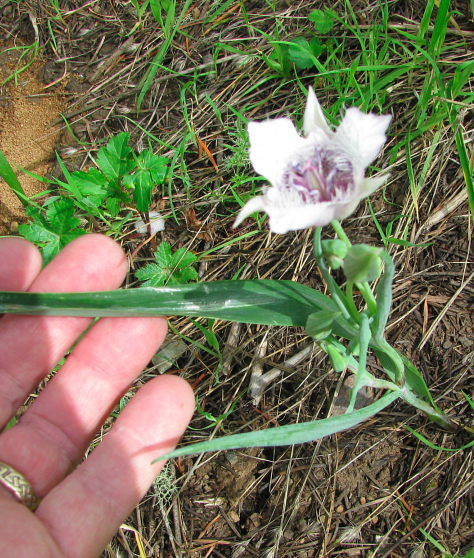 The pointed tips of the petals, or perhaps the fuzziness, give rise to the common name. This is the type species of the genus, discovered in 1806 by Meriweather Lewis on the Lewis and Clark expedition near what is today Kamiah, Idaho. Many are known by the common name of Mariposa lily; see one here.

The Calochortus genus contains a relatively large number of rare, localized, and endemic taxa, so don’t disturb any you find: they may be part of a very small population. One such is found only along the Umpqua River in SW Oregon. They seem to be more sensitive to soil type than to other aspects of habitat, with some preferring serpentine soils, which characteristically have high concentrations of toxic heavy metals. Although heavy metals like nickel, lead, and zinc are toxic to most plants, some can withstand them, perhaps taking them up to protect against pathogens and pests. Still, it’s an interesting puzzle why certain species would preferentially grow where toxic metals are found in abundance. 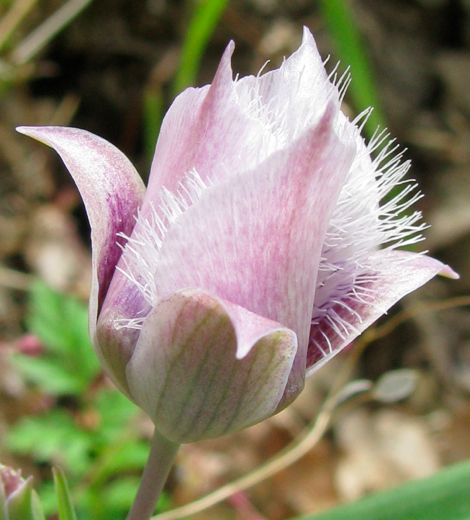 Look into the center of this unassuming little flower: 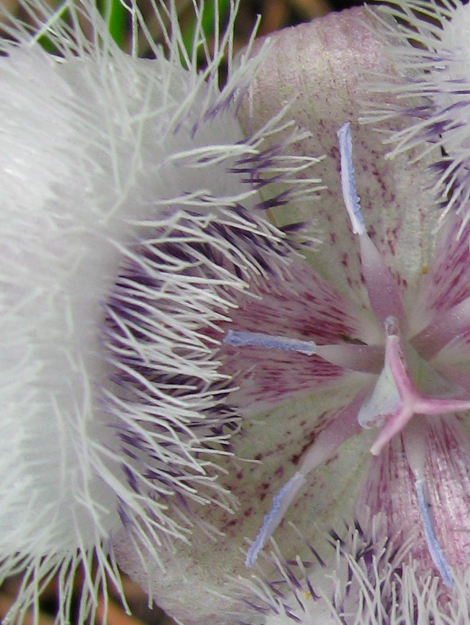 How wonderful the digital camera is, enabling us to take home such magnified images of small beauties, so we can look our fill at them.

Above is a more assertive plant: native to much of western North America from California to British Columbia, it has spread as far as New England, thriving in the disturbed soils of many habitats. It’s a roadside hitchhiker, an “invasive non-native” as far away as Australia, and toxic to livestock; for its sins it carries the dismal name of Bugloss fiddleneck, Amsinckia lycopsoides. (3)

Look at the symmetry in those petals.

The Hooker after whom it is named is the immensely influential British botanist William Jackson Hooker (1785-1865), first director of the Royal Botanic Gardens at Kew. His son Joseph Dalton Hooker, who grew up attending his father’s lectures, also became a renowned botanist and was the second director of Kew. He classified the plants that Darwin collected on the Beagle, and the two scientists became close friends. Many New World plants are named after one or the other of the Hookers, though only the son visited our hemisphere.

This post grows long, but we saw so many great flowers! Just one more: Phacelia heterophylla, or Variable-Leaf Scorpion-Weed, is as the botanists say an an erect, unbranched herb (herb, meaning neither a grass nor a woody plant).

Naturally I was curious why the plant was called “scorpionweed”. Online explanations refer to “the way the stem curls like a scorpion’s tail”, as in the picture below of another species that’s found in Arizona. 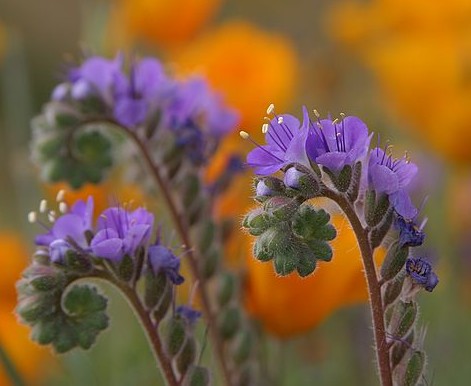 That species has blooms only along one side of the stem, while the one we saw has blooms surrounding the stem in a way that would make such a curling habit unlikely. Maybe the dramatic name has just spread to various members of the Phacelia genus whether it applies or not. Or, another possibility is that “scorpion” might refer to the ability of some members of the family to cause a skin rash, like poison oak or ivy, in some people. All those tiny hairs do look itchy!

No unusual wildlife sightings on this walk, not like the day we saw four osprey (one was doing an odd behavior, I do have to write about that soon). One caterpillar, unidentified:

and our hiking buddy Jack, here near a giant tree marked with what we hope is the sign for “Seed tree, do not cut”. 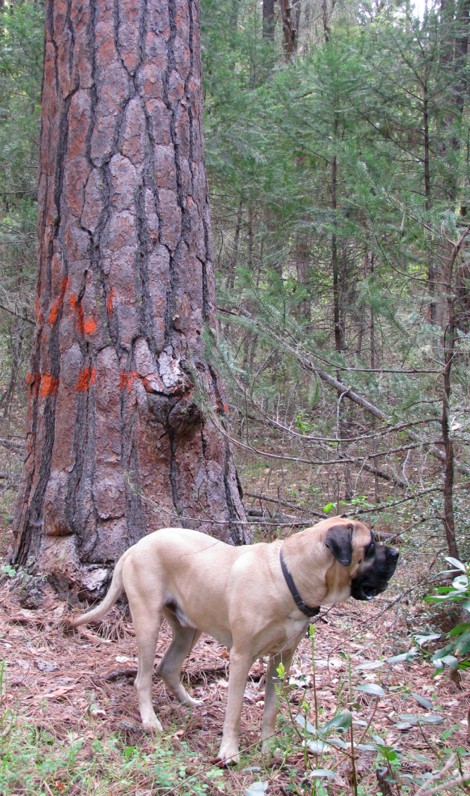