Mint is fine as a culinary herb, but plant it in the ground and it’s like having a tapeworm: you’ll never get rid of it and it just gets bigger. I keep pulling and slashing away at the mint planted by a previous resident, to no avail. The tiniest piece of root or stem will grow a new plant if it finds a little water. Stems flop to the ground and root, new plants pop up from seed or wandering underground invasive roots. And somehow it even hangs on, once established, here in the long hot dry summer.

And here it is, in bloom! I was irked until I saw how much “our” honeybees were enjoying the flowers. (I’ve posted before about the small hive of honeybees in a cavity in a dead oak tree on our place.) 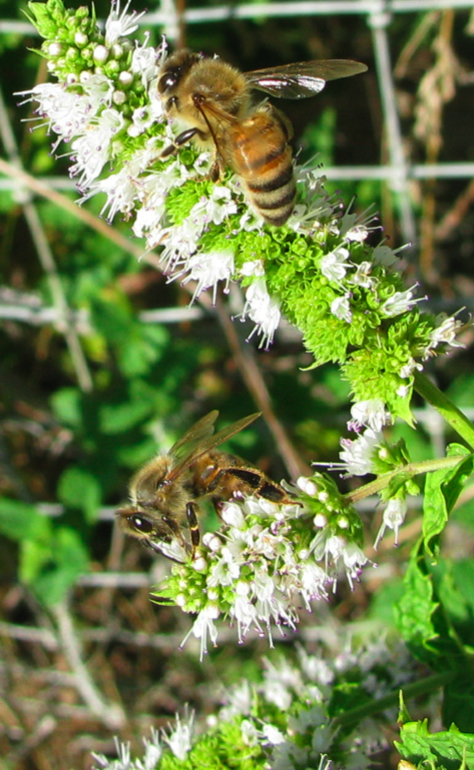 The wire fence in the background encircles our vegetable garden; the mint just loves it in there, where there’s regular watering. If only the gophers would use the mint as a garnish for the vegetable plants they devour: every single sweet pepper plant (7 plants!) was sucked down into the ground by the gophers this year. It happens overnight as if the plants walked away, but dig and you will find remans. And the gophers tunnel around the roots of other plants which they don’t seem to eat, but the plants die anyway.

For ten years I waged war against the gophers until the futility of it sank in. I tried everything: a trap––lots of work to dig in the stony dry ground looking for a straight open run of tunnel, and the trap never caught one anyway; gassing them with exhaust via a pipe from the car to a tunnel opening (yes, there is a specialized flexible pipe sold just for this purpose, I’m not the only anti-gopher fanatic out here)––results apparently nil, though how can you tell?; curses and exhortations; and dozens and dozens of sulfurous poison gas bombs, like big firecrackers that you light and stick into a tunnel you’ve excavated, then cover it up so the smoke goes through the tunnel system. Or that is the theory. Within a few uses the gophers were changing their tunnels: adding right angles and frequent backfilled partitions. Even stranger, they often dug back to the site of a “Gopher Gasser”, then up to the surface, and left me a message:

That’s the carefully ejected remnant of the “Gopher Gasser” placed right on top of the new pile of dirt! If you look closely you can imagine the little thought balloon above it…

After seeing the bees busy in the mint I checked out their activity elsewhere. This is one of the big “bumblebees” or so we call them, on a Caryopteris plant (a hybrid cross between C. incana and C. mongholica ‘Bunge’, with cultivars such as “Bluebeard” or “Blue Mist Spiraea”). 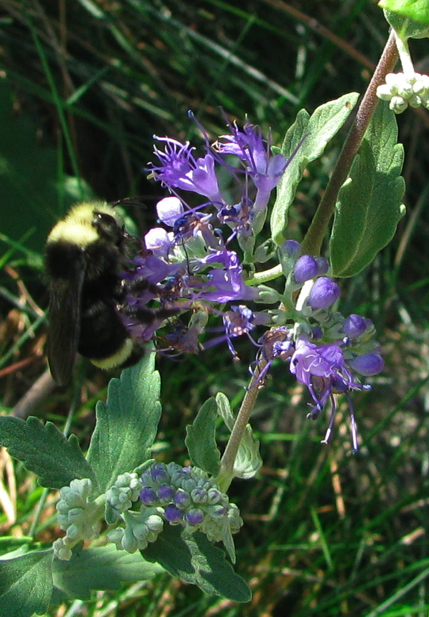 There were honeybees on this plant too, but more of the big guys. 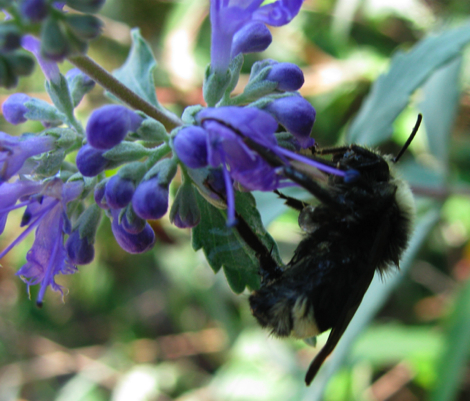 One was clinging upside down, sheltering under a leaf because the sprinkler had been on this plant earlier.

I like to watch the industrious behavior of the bees; if only I could feel that way about the gophers. Well, maybe a mint julep would help…

5 thoughts on “Bees in the garden, and strange habits of gophers”