Despite an unseasonable snowfall last week, two days later we found some uncommon wildflowers blooming on a sunny slope bordering a forest road.

We’d noted the leaves of these delphiniums (larkspurs) the week before, and now they were in full bloom 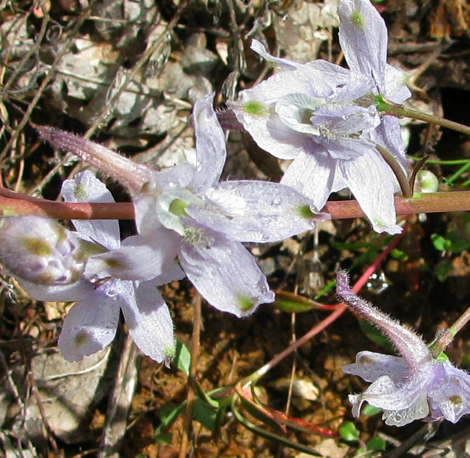 but according to the experts only two white species (Delphinium leucophaeum and D. pavonaceum ) occur west of the Cascade Mountains, and neither are found south of the Williamette Valley (in northern Oregon). Their range may be restricted to the area of a temporary lake formed after one or more of the catastrophic Missoula Floods which occurred around 15,000 years ago, when glacier dams broke releasing huge quantities of water and silt, over parts of what’s now Oregon and Washington.

Delphinium menziesii occurs in our county, but it’s dark purple with a more finely divided leaf. Maybe the ones we saw are Delphinium andersonii, which does seem to have light blue to very pale almost white flowers, and a three-lobed leaf like the ones we saw.

An exciting find was this fritillary, a member of the lily family.

Wikipedia says that “fritillary” comes from the Latin term for a dice-box (fritillus), and probably refers to the checkered pattern, frequently of chocolate-brown and greenish yellow, that is common to many species’ flowers. (And there’s a group of butterflies so named for the same reason.) The checkered pattern is visible on both the bud and opened bloom above. 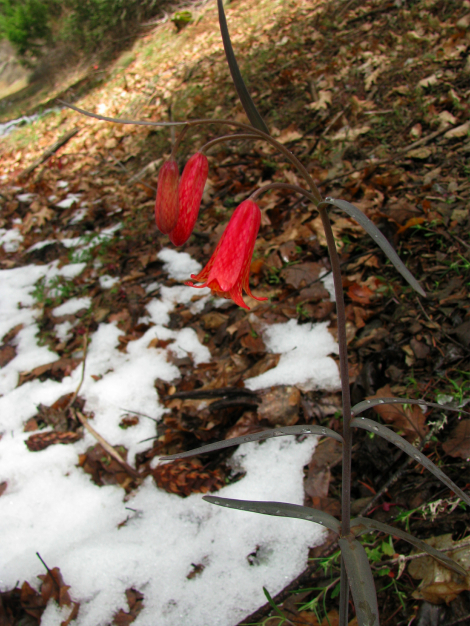 At least 3 species are found around here; this one is Fritillaria recurva, the Scarlet Fritillary. The nearby town of Jacksonville has a festival every year in honor of the rare species found near there, Fritillaria gentneri, which has darker red flowers. And we have a few times seen, on our own property, Fritillaria affinis or Chocolate lily, which has bell-shaped greenish flowers with brown markings. We don’t have any photos of it, but here’s one from USDA

Their account notes that the root bulbs are edible, though bitter, and were an item of trade for tribes in this area. F. affinis is quite variable in flower color, sometimes showing the reverse of the ones we’ve seen: purplish-brown flowers with green or yellow “dice”, as below. 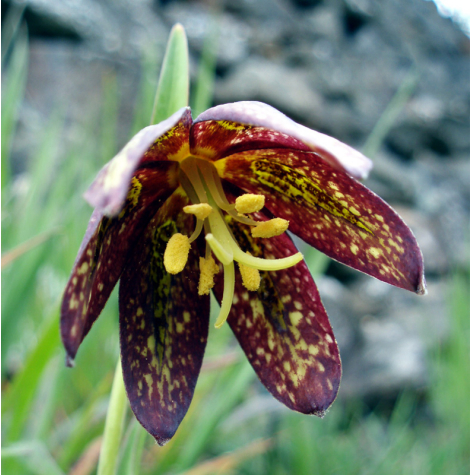 We also saw two other wildflowers more familiar to us: shooting stars,

always one of the more abundant flowers this time of year,

and our beloved Trout Lilies (Erythronium hendersonii), delicate and demure plants with a very brief duration of bloom.

They range in color from nearly white to a darker violet-pink. Flowers are borne so close to the ground that it’s hard to get a look from underneath. 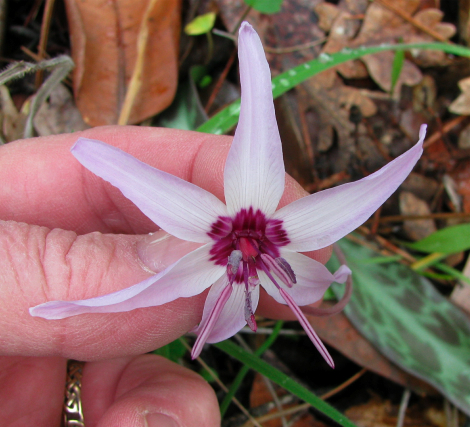 The mottled leaves are the reason for some of the common names—Trout Lily, Fawn Lily—and I think they are as beautiful as the flowers, in their way. 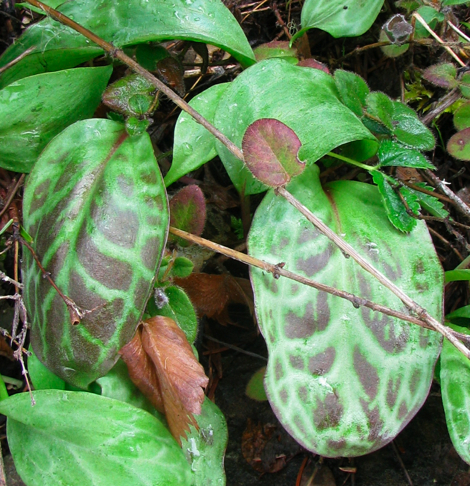