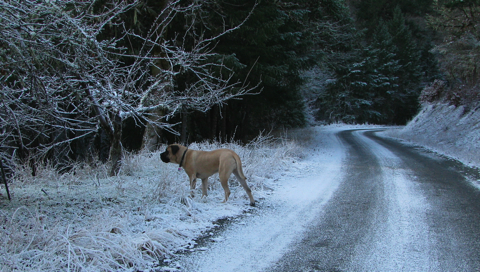 It’s been a bit colder here than usual the past few days, with night-time lows in the high teens and freezing fog some nights. Yesterday Jack the mastiff and I walked up Star Gulch Road, which goes along a stream with several private gold-panning claims on it. But it was way too cold for panning!

Nights of heavy frost had enrobed the vegetation in dense but delicate icy structures.

Jack and I each pursued our personal obsessions. His are: following wherever I go but arriving there first, and of course sniffing around the woods to see what creatures have been there. Mine, that morning, were: walking fast enough to stay warm, interspersed with stopping and kneeling to take photos. Jack probably thinks the camera is some sort of mechanized human sniffer when I put it up close to things. Well, he’s right, in a way. I’m afraid I do see more when I take the camera, and certainly the camera remembers things better than I can.

Sometimes Jack responds oddly to objects; a statue of a horse or animal is approached cautiously and sniffed at full extension, ready to leap away. On this walk he saw a large wooden “Put out your campfire” sign, on 2 wooden posts, and reacted as if it were some strange beast. He barked at it until we got up to it then very carefully checked it out. Well, if it had been an animal it would have been quite a big one, easily six feet tall with legs made of four by fours, so I guess I understand his caution if not his failure to discern its true nature. Or, maybe it was really some entish thing just pretending to be a sign . . . you never know.