I’ve encountered this statement a few times since being diagnosed with fibromyalgia in 1992. Finally, at age 63, I think I’m qualified to offer an opinion upon it:

No, unlike a fine wine or a teething puppy, fibromyalgia does not get better with age.

It might seem that way, because some things that do change with age may lessen one’s concern about symptoms, or even ameliorate them.

As we grow older, we expect to have memory lapses, aches and pains, and reduced energy and strength. The person with fibromyalgia has a head start on all of these, believe me! But with advancing years, these symptoms seem a bit less unreasonable—or perhaps I should say unseasonable—even though I am still more tired, forgetful, etc., than an otherwise healthy person of my age ought to be.

Starting several years ago other people about my age began assuring me that my symptoms were “normal” for this stage of life, they had them too. Their intentions were benign, but I don’t like to hear this; not because I am clinging to the distinction of my disease, being “sick” but not “old”, but because I feel that the impairments of fm have been different. [It also echoes the remarks so familiar to people with fm or cfs or other chronic conditions, “Oh, you’re really tired/achy? Yes, I’ve had that too, just get some extra rest, you’ll feel better.”]

I was 35 when an injury caused the continuous pain and disturbed sleep that gradually turned into fibromyalgia by age 40 or so. During that time I went from having an unusually good memory, to the reverse. What did I do yesterday? Did I eat lunch today? What did I do this morning? Often I can’t answer such questions without some sort of reminder. Sometimes even with a reminder I have no recollection whatsoever of very recent events, and everything beyond a few days ago is gone or vague. Some days I grope for words—for a particular word, or to be able to put my thoughts into words at all. For a person who used to remember where on the page a certain passage of a book was to be found, or the details of bibliographic citations years after checking them, this sudden decline was, and remains, a severe assault upon my sense of who I am. And rightly or wrongly I think the daze that so frequently envelops me is not typical for a 63-year-old. Maybe at 85 I’ll feel it is age-appropriate. Until then, dammit, I’ll feel ticked off and robbed. Join the club, eh?

Still, inevitably over time one grows less sensitive to diminished abilities, and the limitations are less at odds with one’s lowered expectations.

As for symptoms seeming to decrease with age, I think this is a result of getting better at coping and self-pacing. I’ve learned to avoid things that aggravate the fm, such as late nights, loud or crowded places, being on my feet too long, and overexertion (whether it be in duration or in type of activity). I’m less of a perfectionist, I have a combination of medication and mental techniques to help me get to sleep most nights, and I feel okay about saying “I need to go lie down and rest for a while”. It’s following the naval maxim of “maintain a steady strain”.

The danger with all of this—lowered expectations, avoidance of stressors—is that it becomes a downward spiral. And age provides a reassuring excuse. Of course I’m doing less than I did last year, I’m getting older.

I keep pushing myself mentally, with challenging reading and dogged efforts to learn new things. Even though most of what I read today will be gone from my mind tomorrow, I tell myself that the effort may keep the neural connexions from deteriorating as we know they do with lack of use. Blogging has become a good motivator, encouraging me to do some writing, and follow research interests to produce and finish short pieces.

Physical exertion is harder because the pain and fatigue always increase, sometimes severely. When I was working a fairly physical job, I came up with this description for how I felt when I got up in the morning: “as if I’d been forced to run up a mountain, and then kicked and rolled all the way back down”. The chronic fatigue and pain in muscles and joints have been dialed back now that I’m not on my feet all day lifting, bending, carrying, etc., but they’re still there. I’m struggling to stay on a program of walking about 45 minutes every other day, motivated by a recent blood-test result that was in the pre-diabetic range. Some days I don’t want to expend a big part of the day’s energy for walking, or I feel worse than usual. There are no rewards of feeling noticeably better, but if I take the dog and my camera I will enjoy the walk itself.

Being off of methadone has made a big difference mentally and physically. It’s been two years last month, and I think I’m still improving. I couldn’t have walked for 45 minutes before that. Drugs that don’t help just weigh you down, and methadone does a lot more harm than most. (earlier post about getting off methadone)

So, in some ways I really am feeling better. But it’s not due to aging. 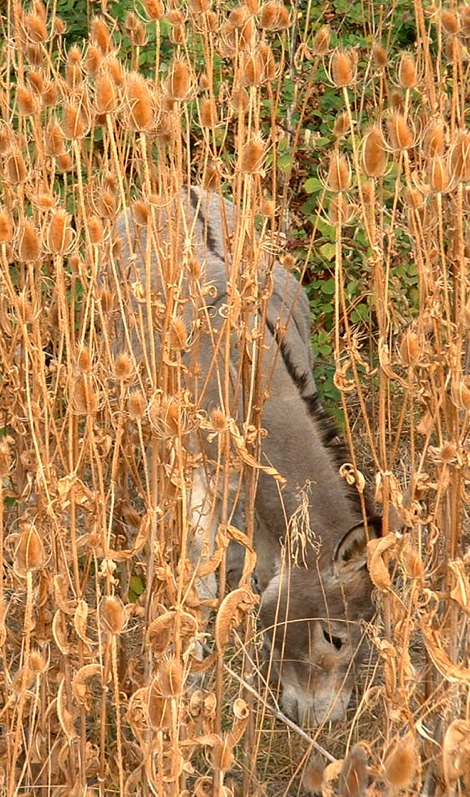 After I put the word “whining” in the header, I encountered what would have been a good alternative if it weren’t quite so obscure. It has such appropriate associated meanings. I may whine and twine, but I’m trying not to dwine.

Twining
A minor lexicographical result of the devastating floods in Cumbria last week has been the appearance in at least two UK national newspapers of the dialect word twine, to complain or whine (“Cumbrians are a unique breed. They say what they see. They are hands-on people. They will twine and moan but then they will just get on with it.” — Metro, 23 November). It was at one time widely known throughout Scotland and the north of England. By way of another of its senses, to be fretful, ailing or sickly, it may be connected with dwine, another dialect word, to pine or waste away, which is from an ancient Scandinavian source. from Michael Quinion’s World Wide Words, # 667, 28 November 2009.

8 thoughts on “Does fibromyalgia “get better” with age? (Alert: Whining ahead)”