Drool is back in our lives, finally; and wisps of fur in the corners, and the need to refill the water dish every few hours. We have a new mastiff.

Our beloved English Mastiff Bart, whose picture is at the top of this blog, died in February of old age at eleven and a half, very old for a mastiff. There will never be another Bart, but we knew after only a short time with him that we wanted a mastiff in our household always. We got Bart at 8 weeks but decided this time that a mastiff puppy was more than we were ready to handle, with us being older and my husband facing knee replacement surgery next month. Enter breed rescue: programs run by devoted volunteers for each dog breed, aimed at re-homing dogs of their breed.

These folks want the dogs’ new homes to work, since the dogs have already been through at least one sad parting (and sometimes neglect or worse, as well). We filled out extensive applications, with references; and someone in our area came to meet us and check out our surroundings. Is there a fenced yard? Are there stairs to the house that would be a problem for a mastiff when he’s old? Other pets, livestock? Feeling of stability? Would-be owners’ attitudes and familiarity with the breed, and commitment required? All that stuff and more. We passed, and last weekend we travelled to visit prospective young males in foster homes. The third one we visited was the right one for us, and we drove home with our new mastiff Jack. 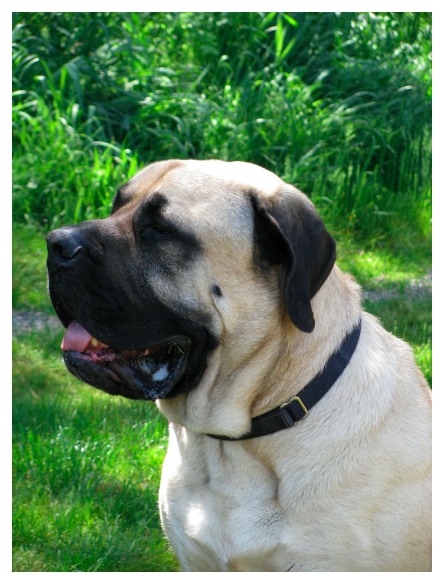 We weren’t looking for a dog that resembled Bart, but it turned out that way. Jack is “fawn” like Bart, but is taller and longer-bodied. He has the same steady intelligent gaze, calm manner, and affectionate nature, that Bart did. He’s a little over three, and his previous home gave him good socialization and some training––age and training were important to us: a rambunctious rowdy 150-lb dog does not mix well with recovery from knee surgery.

Our elderly Rhodesian Ridgeback Brook went along on the trip, and got to spend a couple of hours with Jack after we decided (early in our visit) that he was the one. 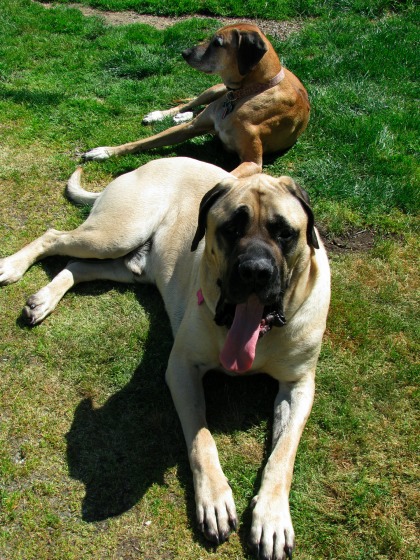 She went from growling at him to following him around to sniff him, and they rode home uneventfully in the back of the SUV together. We did have to convince Jack not to ride in the front seat, right at the beginning, but that was easy. He is easy-going and wants to please. Essential, in a dog his size! English Mastiffs are protective of their owners’ person and property but have been bred for a long time to have a calm and gentle temperament. A mastiff’s size and formidable appearance mean that he or she rarely needs to give more than a look or a bark, to warn off some stranger. Responsible breeders (of any dog breed) pay as much attention to temperament as to physical characteristics. You want a dog who is healthy and reliable in both regards, mens sana in copore sano.

Jack has tried out all the dog beds in the house but has not gotten up on the couch even though he sees Brook up there. Until we can clip his long bear-claw-like nails, it is just as well. He hadn’t let the foster home’s vet draw blood for a heartworm test but our vet got one easily (and it was negative), with the old Cheez Wiz method (dog is busy licking the cheese-like substance out of the nozzle, and nothing else matters!) but by the time we got to the nail clipping part he’d had enough cheese and resisted. No growls, just pulling away, and believe me he is strong. We use a dremel for dog nails so I have left it on the floor the past two evenings to introduce him to it, and have also been getting him used to me holding his paws and touching his nails. He’s making progress, but no telling if that will hold when the actual clipping/grinding occurs. He has tried to eat the sandpaper cylinder off the grinder but I can’t interpret that, except he isn’t backing away from it any more.

Jack’s original home was with a couple and their teen-age daughter. He was the husband’s dog but when the marriage broke up the husband abandoned him, then the wife had to sell the house in order to give the husband his share of the money. She had a dog of her own, and could not keep Jack, BUT she was savvy enough to know about, or find out about, a breed rescue organization with a local presence. Friends of Rescued Mastiffs is a national organization, non-profit, providing care, foster homes, and re-homing to mastiffs. They deal with dogs from situations like Jack’s, dogs found as strays or in shelters, ones seized for neglect, and from puppy mills (both young ones and breeding stock). Good rescue organizations like FORM also check out the dogs to see if they are suitable for a new home, and what the conditions might be (OK with cats? other dogs? too rambunctious to be around small children at this age? needs someone who can do extensive training?). There are other good organizations helping mastiffs, but FORM was Jack’s salvation. We count ourselves very lucky to have found Jack and he seems to be settling in very happily with us. We’ll be sending photos and a report to the regional coordinator, in hopes she can pass the word on to the woman and girl who loved Jack and had to give him up. He has obviously been well loved and cared for.

No breed of dog is “for everyone” and English Mastiffs are no exception. They occupy a lot of space; fur and drool will find their way onto your furniture, clothing, etc.; and they want to be with you all the time. That’s usual for dogs, though, they aren’t toys with an on/off switch you can pay attention to only when you feel like it.

Giant dog breeds have shorter life spans than smaller dogs, and if they need medication or surgery the bills will be big too. That’s another reason to check out breeders carefully, see the parents, ask about testing for hip/elbow/eye problems that may be inherited. Visit someone with one or more mastiffs and see how it feels to be around such big dogs. Talk about the pros and cons. Think about your situation: how much time do you have to spend with a dog (for whom you will be the center of life)? How much space, indoors and out? We have a big house and fenced area, but our newly acquired 2005 Trail Blazer seems a bit crowded now with Brook and Jack in it!

Do you have plans to move, or have a baby? Dogs and babies are not at all mutually exclusive; pit bulls were reportedly used as “nanny” dogs to watch over toddlers a hundred years ago, and an adult mastiff who has been properly socialized is gentle, tolerant, and completely reliable around children. But you may not have enough time to do justice to both a new dog and a new baby; certainly you need to see how your dog of any breed behaves around children–does he or she get excited so that body or tail could knock a child over? Is the dog able to resist “taking candy from a baby”? and so on. None of these are reasons to give away your dog before having a baby, but they are factors in getting a dog, or in planning how your dog will be able to be around your children especially when dog or child is very young.

Educate yourself before acquiring any breed of dog! Even mixed breed dogs usually have some discernible breed heritage, and shelter employees or friends who really do know a lot about dogs, can be helpful. An as example, terriers and sheepdogs have higher energy levels than many other breeds: not a good choice for a dog that will spend a lot of time alone.