Yesterday was a beautiful late-spring day (our usual hot weather has been happily delayed) and we went to a draft horse pulling contest, and then to visit my father where we watched the Belmont Stakes broadcast.

I don’t follow horse racing, but I had seen something about recent controversy in the sport including concern over the favorite in the Belmont Stakes, Big Brown, being run with a hoof-crack. Had he won as expected he would have been the first Triple Crown winner since 1978. Unfortunately something was amiss with Big Brown, and his jockey pulled him up well before the end so that he finished last. Maybe it was the hoof-crack, maybe something else; his trainer and the vets passed him as fit, and my layman’s opinion that he was favoring one leg going from the barn to the track may have been my imagination. Perhaps more details will be released.

I also took offense at the commercial linkage of the horse “Big Brown” to UPS: the mounted track employee who accompanied this horse and his jockey on the pre-race parade had “UPS” prominently on his windbreaker and I had a brief glimpse of a banner above the starting gates reading “What can Brown do for you?” Will the Sport of Kings follow so many other public events in this regard, so that we can look forward to Pepsi’s Belmont Stakes or Jim Beam’s Kentucky Derby? Then jockeys can wear big corporate logos on their silks, and the horses can even be re-named for the main sponsor product. “And in the stretch it’s Burger King leading, Windows Vista and GoDaddy.com moving up, and Scott’s TurfKing Fertilizer in fourth…” Well, maybe the dramatic failure of the Big Brown/UPS advertising opportunity will delay this.

At the draft horse pull

The draft horse pull promised to be a much different event. It was held at a local historic farm as part of a Saturday festival with old tractor displays, a pony ride, goats for toddlers to feed grass to, wagon rides, and demonstrations of crafts like lace-making and woodcarving. The pony ride wasn’t the commercial event with dispirited horses plodding around day after day, but one steady horse being led around by a remarkably attentive teenage kid who was very gentle and responsible. The riders ranged from the nine-year old with pink cowboy boots to youngsters not even walking yet, who waved their arms and babbled happily as moms walked alongside.

In a draft horse pull, the horses–teams of two in this case–are hitched to a weighted “sled” which they pull for 27.5 feet down a 20 foot wide track. The weight is increased until finally only one team can pull it.

This pull started with a 1000 pound sled, adding 1000 pounds after each round. In the first couple of rounds the horses were calm, just walking away with the weight. As they got warmed up and the weights increased, most of the teams became eager and excited, pulling hard as they approached the sled.

Hitching the teams to the sled became a tricky business. The horses were ready to surge forward all on their own, unexpectedly. The pulling parts of the harness are attached to a crossbar (whiffletree, I think it is called) on the ground behind the horses. It’s visible in the picture below of a team not hitched to the sled. 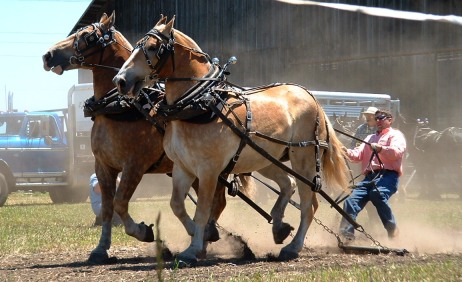 The driver controls the team while another person gets between them and the sled to fasten the sled’s cable to the whiffletree. 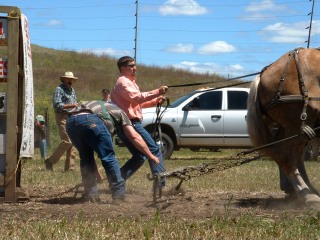 This is one of those jobs like being a choker-setter in logging, requiring timing, alertness, experience and some luck to get it done right without getting caught in the explosive movement of powerful forces. Sometimes it takes a third person in front of the horses to restrain them from starting forward; occasionally the person in the danger spot has to jump back and then try again. The audience was urged to keep still to avoid any sounds the horses might interpret as a signal to start.

By the time the weight of the sled is up to 5000 pounds, equalling the average weight of one of these two-horse teams, it’s getting difficult to drag and the horses really throw themselves into it with all their amazing muscle power. 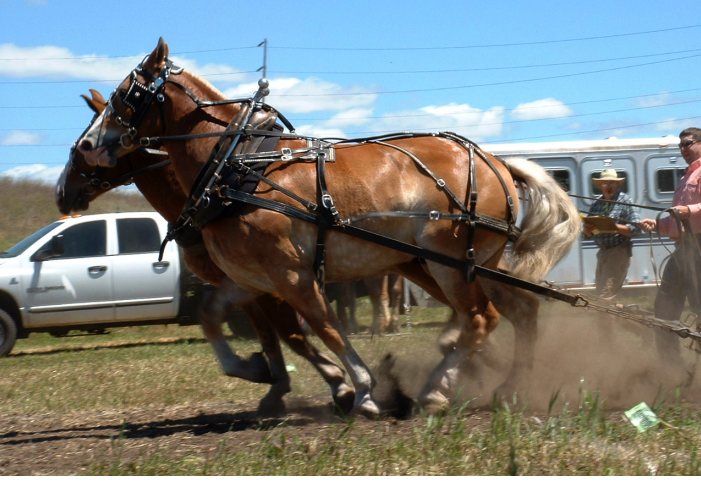 But in too many of the teams we saw, the two horses weren’t pulling equally: one was doing most of the work, sometimes really seeming to struggle, while the other was shirking. As someone in the crowd remarked, “That’s what they mean by “not pulling your weight!”” Some of the hard workers were rearing up slightly and actually throwing their body weight forward against the harness, hindquarters making a powerful effort, while their team-mates just leaned into it a bit.

I don’t have any expertise in this and so I looked for factors I might not be considering. The distance being pulled is very short as compared to real pulling jobs in logging or farm work, giving the driver little time to give commands, and also perhaps the horses are accustomed to taking a little more distance to get evened out. On the other hand, these draft horse owners travel widely to competitions just like the one we saw, so it should be a major part of training to have both horses pulling evenly right away. The horses know very well the nature of the event, and the lazy ones have apparently figured out that such a short pull won’t last long enough for them to be called on their lack of effort. In fact I only heard one driver giving any verbal commands, and this was at 6 or 7000 pounds. His team had trouble getting started and he urged them on individually by name. They worked together and moved the sled.

We were both disturbed enough to leave, my husband first and me a few minutes later during the 7000 pound pulling. By the sound of things the event continued for another few rounds–another half-ton added each round–and for us, at least, it could only have become more difficult to watch. I am contacting some draft horse people to find out more about this; if I’ve misinterpreted what I saw, I’ll correct this post.

And no, I’m not a PETA member or an “animal rights” fanatic. In fact I don’t believe animals have rights in the sense that people have rights. I believe we human beings have strong moral obligations to avoid causing suffering to other humans and to animals and that these obligations must be backed up by well-enforced laws. Some animals like horses and dogs have been bred to be working partners and companions of humans, and we train them to do certain things, but there is no need for cruelty or the imposition of suffering in the work or the training. I’m not a vegetarian, but I believe we have an obligation to treat all animals in human care with compassion and expertise. Two examples of the “expertise” part: –Temple Grandin’s work to design slaughterhouses in accordance with the behavior and perceptions of livestock animals so as (for instance) to avoid having to force them through frightening passages or over walkways with poor traction where they fall. –A horse-owning neighbor’s account of the actual impact of recent “humane” legislation to ban horse slaughterhouses in the US: old and unwanted horses being simply abandoned on public or unfenced land, and the transportation of horses, in packed trucks, to slaughterhouses not in their own state…but across several states to Mexico, where there are no real humane standards enforced.